Lecture on the Legacy of Late Supreme Court Justice Antonin Scalia set for Feb. 6 at Tusculum

A lecture on the legacy of the Late Supreme Court Justice Antonin Scalia will be held on Tuesday, Feb. 6, beginning at 7 p.m. at the Behan Arena Theatre in the Annie Hogan Byrd Fine Arts Building on the Tusculum campus.
The lecture will be presented by Dr. David Scott and will focus on Justice Scalia’s jurisprudence, significant judicial opinions and his impact on the Supreme Court.
Dr. David Scott was a visiting instructor of political science at Tusculum from Aug 2014 to May 2016. He has also taught as an adjunct instructor at Carson Newman University and Walters State Community College and as a graduate teaching associate at the University of Tennessee-Knoxville.
Dr. Scott earned his Ph.D. in political science from the University of Tennessee, with a focus in American politics. In addition, he holds Juris Doctorate and Master of Dispute Resolution degrees from Pepperdine University, and he is a licensed attorney in the State of Tennessee.
His teaching and research interests include American constitutional law, civil rights and liberties, the influence of interest groups on the Supreme Court via the submission of amicus curiae briefs and political philosophy
General admission is $7. For more information, call 423.798.4620 or email jhollowell@tusculum.edu. The event is part of the Cicero Lecture Series presented by Acts, Arts, Academia of the Arts Outreach program of Tusculum. 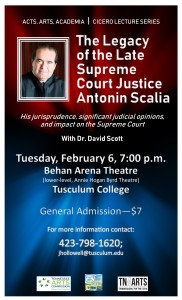