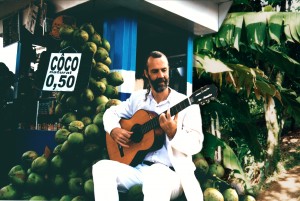 Burgess will perform at 7 p.m. in the theater in the lower level of the Annie Hogan Byrd Fine Arts Building (side entrance). The event is part of Tusculum College Arts Outreach’s Acts, Arts, Academia 2013-14 performance and lecture series.

Praised by musicians and critics worldwide, Burgess is recognized as one of today’s outstanding guitarists. His international appearances as soloist and chamber musician have taken him to concert halls throughout North and South America, Europe and the Far East. He has performed at Carnegie Recital Hall, the Lincoln Center and Town Hall in New York.

Burgess has made numerous appearances as an orchestral soloist, including featured performances with the Philharmonia Virtuosi of New York and the American Chamber Orchestra at the Kennedy Center.  A first prize winner in the Andrés Segovia Fellowship Competition in New York, Burgess has also won top honors in international competitions in Mexico City, Toronto and Munich.

His journey with the guitar began in Mexico City under the tutelage of renowned Argentine guitarist Manuel López Ramos. He earned a bachelor’s degree in music at the University of Washington, and later earned a Diploma di Merito while on full scholarship at the Accademia Musicale Chigiana in Italy studying with Oscar Ghiglia. In the 1980s, he periodically received classes from the great Spanish maestro Andrés Segovia.

In his extensive travels in Spain and Latin America, Burgess has explored traditional guitar styles, along with many popular and folkloric types of music. He has compiled one of the largest collections of Latin American guitar music in the country, from which he often draws interesting and unusual works for his programs.

For more information about the performance, please contact Arts Outreach at 423-798-1620, jhollowell@tusculum.edu